Following an extended delay after migrating to a new platform, Issue 21 of Romantic Textualities offers the first of two special issues dealing with ‘Romantic Visual Cultures’, which will continue into Issue 22. These twin issues are stimulated by a colloquium convened on the topic by the Centre for Editorial and Intertextual Research at Cardiff University in 2009, and supported in part by the British Association for Romantic Studies. The conference generated illuminating new perspectives on Romantic illustration, intermediality and visual culture, sparking lively discussion between delegates, as well as stimulating additional contributions after the event, which we are delighted to publish in Romantic Textualities. This main section is preceded by two freestanding essays that focus on different aspects of Romantic print culture and intertextual relationships, in analyses of John Murray and Thomas Moore. The issue concludes with a report on gothic typologies and ten book reviews.

In ‘Authors in an Industrial Economy: The Case of John Murray’s Travel Writers’, Bill Bell examines the relationships between the House of Murray and its authors during the Romantic era. Murray’s firm was well known as one of the principal British publishers in the field of travel and exploratory literature throughout much of the nineteenth century. The titles that were published under the proprietorship of John Murray II (1778–1843) and John Murray III (1808–92) read like a who’s who of nineteenth-century travel writing. The John Murray Archive in the National Library of Scotland offers one of the richest sources for publishing history, providing unequalled insight into the way that a prominent London publisher dealt with its authors in the age of colonial expansion. Bell’s article examines the processes through which Murray’s works came to make their way from manuscript to publication over several decades, and concludes with a discussion of authorial self-presentation, examining ways in which some of Murray’s travel writers fashioned themselves, through various discursive strategies, in accordance with their position within this new literary economy.

Jane Moore’s ‘Thomas Moore, Anacreon and the Romantic Tradition’ offers a historical and generic account of the inter-cultural British and Irish nexus of imitation surrounding Thomas Moore’s first published volume of verse, his remarkably successful Odes of Anacreon, Translated into English Verse, with Notes (1800). The essay situates Moore’s volume, imitative of the sixth-century BC poet Anacreon’s lyrics of wine, women and song, within the dual Irish and British contexts of Anacreontic verse published in Ireland in the eighteenth century, in the contemporary cultural milieu of glee clubs, bodies such as the Hibernian Catch Club, the Beefsteak Club, the Humbug Club and the tellingly named Anacreontic Society, whose members frequently performed Anacreontic sentimental and drinking songs, and in the Cockney School Romanticism of Leigh Hunt and John Keats. In doing so, the analysis repositions Moore in his role of Anacreontic versifier as a formative presence at the genesis of British Romanticism as the turn of the nineteenth century, in ways that allow a deeper understanding of the culturally complex formation of Four Nations Romanticism.

The main section of Issue 21, on Romantic visu-al cultures, begins with Katie Garner’s ‘When King Arthur Met the Venus: Romantic Antiquarianism and the Illustration of Anne Bannerman’s “The Prophecy of Merlin” ’. The first edition of Bannerman’s Tales of Superstition and Chivalry (1802) contained an erotic engraving of a naked Venus figure, which was declared ‘offensive to decency’ by Scottish audiences in the poet’s native Edinburgh. Garner’s account investigates the controversy surrounding the engraving and the puzzling disparity between it and the ballad it illustrated: the Arthurian-themed ‘Prophecy of Merlin’. Using evidence from Bannerman’s correspondence with noted Scottish male publishers and antiquarians, the essay argues that decision to include the dangerous engraving was symptomatic of current anxieties surrounding a female-authored text which threatened to encroach on antiquarian and Arthurian enquiry.

The often complex dynamic between writer and artist is examined in Richard Hill’s ‘Walter Scott and James Skene: A Creative Friendship’, which contends that Skene, Scott’s amateur-artist friend, was often used as a visual research assistant for many scenes contained within the Waverley novels. Skene became an advisor to some of the earliest illustrations of Scott’s novels that were produced beyond Scotland. In the introduction to the fourth canto of Marmion, dedicated to Skene, Scott writes: ‘The shepherd, who in summer sun, | Had something of our envy won, | As thou with pencil, I with pen, | The features traced of hill and glen’. This glimpse of Skene sketching next to Scott reveals a significant aspect to their friendship: Skene’s sketches were used as aides-memoire, visual references or even inspirations to Scott’s literary imagination for many descriptive topographical or architectural passages within his novels. Through close readings of the novels, Scott’s correspondence and Skene’s own memoir, Hill establishes that Skene contributed signgiicant visual stimuli for a number of Scott’s works.

Complementing this analysis of Scott’s dealings with a contemporary artist is Tim Killick’s longitudinal account of the various representational choices available to artists when depicting a single landmark work of literature. Since his rise to fame in the early nineteenth century, Byron and his work have been significant subjects for visual art, from book illustration to oil painting. Killick’s essay explores Byronic art across the nineteenth and twentieth centuries, taking as a case study the treatment of his late narrative poem, Don Juan. Byron’s wide-ranging appeal was a result of both the popularity of his poetry and the public fascination with his life, but it was also determined by the multiple, fluid qualities of his work which facilitated a huge variety of readings across the centuries. Here, the visual implications of these ways of reading are considered, and the essay argues that pictorial Byronism played an important role in presenting evolving perceptions of the broader Romantic movement.

In ‘Reverse Pygmalionism: Art and Samuel Rogers’s Italy’, Maureen McCue resituates Samuel Rogers’s influen-tial work Italy within the wider context of Britain’s post-Waterloo visual–verbal culture. Rogers’s illustrated multi-generic travel book made the Italian peninsula accessible to its upwardly mobile middle-class audience through its miscellaneous nature, its poems, tales, travelogues, treatment of art, antiquarian asides and translation of key Italian authors. It was one of the nineteenth century’s best-selling texts, but it did not start out that way. Indeed, it would take Rogers over a decade in order to produce a profitable object. This article examines this process and the ways in which Rogers responded to key developments in the commercial print market, especially the growing popularity for keep-sakes and annuals, in order to register the publishing market’s dependency on word-image constellations, Britain’s changing relationship with Italy, and, ultimately, the growing purchasing power of a middle-class, female audience.

Manuel Aguirre’s report summarises the findings of The Northanger Library Project, a project that ran from 2006 to 2009, and sought to study the rise of gothic literature against the background of the ‘long’ eighteenth century in Britain. The central concern of the project lay in the study of long-neglected gothic texts, beginning with the ‘canon’ of gothic novels immortalised in Jane Austen’s Northanger Abbey. Its primary tools were the theory of liminali-ty and studies of myth and fairytale which brought out the significance of form. Aguirre’s report outlines the terms of reference and ‘rules’ em-ployed by the gothic as a taxonomical model for analysing the form; as well as pointing forward to further research questions that emerge in the wake of the project.

The issue concludes a collection of ten reviews of publications relating to Romantic-era literature, intertextuality and print culture. These range from considerations of the complex relationships that emerged during the period across various national boundaries (Atlantic/Transatlantic, Ireland, the Highlands, Paris); biographical and autobiographical studies; science and Romantic identity; and the politics of protest in the post-Waterloo age. Following the reviews is an updated list of ‘Books Received’ for review by Romantic Textualities, which enables interested readers and potential reviewers to view a various print-culture related works that are available for review in future issues of the journal.

In addition to the various essays, reports and reviews that make up this issue, we are delighted to announce that Romantic Textualities is expanding its remit in a significant way. The journal is now supported by a regularly updated blog, which complements the periodical nature of its outputs, offering a range of posts from an international team of over a dozen contributors. Items covered focus on our bloggers’ research into and teaching of Romanticism, as well as items of interest and reviews of conferences, exhibitions and online resources. Through the blog, we hope to encourage visitors to make more frequent visits to the journal in order to engage with exciting and dynamic new research that’s taking place in the field of Romantic studies. 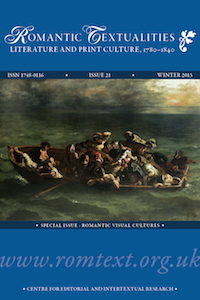 Authors in an Industrial Economy: The Case of John Murray’s Travel Writers

When King Arthur Met the Venus

The Protean Poet: Byron’s Don Juan in the Visual Arts

A Grammar of Gothic: Report on a Research Project on the Forms of the Gothic Genre

Bernhard Kuhn, Autobiography and Natural Science in the Age of Romanticism (Ashgate, 2009)