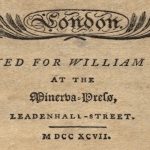 Popular Romanticism (http://poprom.streetprint.org/) is an open access online resource for the study of print and reading in the Romantic period. The following questions are of central importance: What did people read? How did people read? … Continue reading →

This paper resituates Samuel Rogers’s influential work Italy within the wider context of Britain’s post-Waterloo visual–verbal culture. Rogers’s illustrated multi-generic travel book made the Italian peninsula accessible to its upwardly mobile middle-class audience through its miscellaneous nature, its poems, tales, travelogues, treatment of art, antiquarian asides and translation of key Italian authors. It was one of the nineteenth century’s best-selling texts, but it did not start out that way. Indeed, it would take Rogers over a decade in order to produce a profitable object. This article examines this process and the ways in which Rogers responded to key developments in the commercial print market, especially the growing popularity for keepsakes and annuals, in order to register the publishing market’s dependency on word-image constellations, Britain’s changing relationship with Italy, and, ultimately, the growing purchasing power of a middle-class, female audience. Continue reading →

Did Ireland experience Romanticism? Certainly not in the uncomplicated way that scholarship assumes England, Germany and other countries did. In Romanticism in National Context (1988), Tom Dunne’s contribution eschews the standard chapter title form—‘Romanticism in … Continue reading →

Our modern conception of authorship founded on the Romantic ideal of individualism finds purchase and root in the figure of William Wordsworth. Using Wordsworth as a case study, Jacqueline Rhodes draws attention to ‘the critical abnormality’ of Wordsworth’s ‘Preface’ to his two-volume Poems by William Wordsworth (1815). Rhodes explains how ‘the culmination of the century-long development of the radical textual individual: the professional writer’ sees a change in the cultural meaning, and legal definition, of authorship in the eighteenth century, with the move towards author-centric rather than publisher-centric copyright laws. Rhodes demonstrates how authorship and copyright came to be applicable and how ideas of individual creativity, original genius and the solitary author in the context of the European Enlightenment sees plagiarism demonised and individuality valorised. Discussing the emergence of professional writers, and their payment as concurrently respectable, Rhodes charts how authorship is constructed and how the move towards a 42-year copyright period (1842) was based not only on ‘[t]he increased industrialisation of products in the eighteenth century [that] led to an increased commodification of culture, including textual culture’ but the ‘Romantic idea of ‘inspiration’’ which Rhodes argues contributes directly ‘to the idea of textual ownership’ and ‘text-as-capital and author-as-owner’. Continue reading →