In this two-part post, Stephen Basdeo analyses the evolving Romantic and Victorian legacy of the most famous heroic outlaw found in English folklore, Robin Hood.Robin Hood: A Romantic Hero

In a previous post Emma Butcher explored the legacy of Sir Walter Scott’s fiction throughout the Victorian period. My own previous blog post examined Robin Hood’s representation in Romantic literature Walter Scott’s Ivanhoe (1820) and a poem entitled Robin Hood: To a Friend (1820) another prominent writer of the poet, John Keats. The character Robin of Locksley in Scott’s novel Ivanhoe is perhaps the most famous character from the novel. As seen previously, Robin Hood was reconfigured by Scott from a rough bandit into a noble outlaw. His influence upon the legend of Robin Hood, as suggested by the Robin Hood scholar, Stephen Knight, has perhaps been the greatest of any other writer in history. Scott, it is generally assumed, initiated the so-called ‘medieval revival’, and throughout the Victorian period a number of Robin Hood novels appeared all of which in some way adapted Scott’s interpretation of the Robin Hood legend. This post shall illustrate the ways in which Robin Hood in later nineteenth-century adaptations of the legend completed the outlaw’s transformation into a respectable Victorian hero; a process which was begun by Sir Walter Scott. 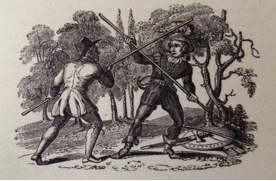 The emergence of Victorian respectability is a theme which has been recently researched by Ben Wilson in Decency & Disorder, 1789-1837 (2007). Between these years, Wilson argues that in Britain a revolution in morals occurred: ‘the generation that was passing into old age in the 1830s and 40s had seen rough and ready Britain, where bawdiness, low-level violence and drunkenness were tolerated, and often celebrated, transform into a policed and more regulated country’.[i] Vic Gatrell attributed this rise in respectability to the emergence of a strong middle class, saying that it ‘reflected the modestly growing prosperity, confidence, and articulacy of a middle-ranking people’ who ‘wished to identify themselves with respectability, virtue and progress’.[ii] Whilst moralists in the press lauded this ‘improvement’ in British manners and morals, Scott himself was a little more ambivalent, saying that vice had not receded amongst the populace but had merely become better concealed.[iii] 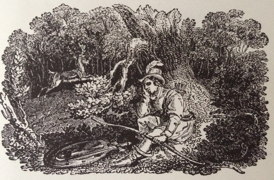 Yet it was outward decorum with which middle-class commentators were concerned, and it was people of the now respectable middle and upper ranks of society who primarily read books. Heroes such as Robin Hood were re-presented according to these new proto-Victorian sensibilities, and Ivanhoe sanitised the legend of Robin Hood for readers when previously the outlaw had been a rather more morally ambiguous hero.[iv] To capitalise upon the success of Ivanhoe, and re-orient Robin Hood according to Scott’s interpretation of the legend, new versions of Joseph Ritson’s (1752-1803) publication Robin Hood: A Collection of all the Ancient Poems, Songs, and Ballads, Now Extant, Relative to that Celebrated English Outlaw (originally published in 1795) were published in 1820 and 1823. Knight suggests that the change of frontispieces in both the 1820 and 1823 editions of Ritson’s work demonstrate Scott’s success in transforming Robin Hood in to a Romantic, respectable hero. He says that:

The Robin Hood who emerged from this crucial period [early 1820s] has changed enormously, as is epitomised in two title pages. The 1820 reprint of Ritson’s anthology has an illustration on the title page showing Robin fighting […] but for the 1823 reprint a completely different image of Robin Hood is imagined […] the outlaw sits and dreams, and a stag escapes. Romantic Robin has been created.[v]

Due to the supposed change in manners and morals during this period, a depiction of violence on the title page would not have matched readers’ sensibilities. The 1823 frontispiece to Ritson’s Robin Hood is altogether more ‘respectable’. Another more explicit indication of the influence of Scott upon nineteenth-century editions of the work of Joseph Ritson is that the 1823 edition of Ritson’s Robin Hood was dedicated ‘to his Grace, Walter Francis Montague Scott’ and the reason for the re-issue of Ritson’s work in 1823 was because ‘this little volume will prove peculiarly acceptable at the present moment, in consequence of the hero, and his merry companions, having been recently pourtrayed [sic] in the most lively colours by the masterly hand of the author of Ivanhoe’.[vi]

Scott’s interpretation of the outlaw myth even influenced the successive scholarship which was undertaken by nineteenth-century antiquaries. In 1847 the antiquary John Mathew Gutch (1776-1861) produced an updated collection of Ritson’s anthology entitled A Lytell Geste of Robin Hode with other Ancient and Modern Ballads and Songs Relating to this Celebrated Yeoman. Gutch made Robin Hood respectable to the public in his short ‘Life of Robin Hood’ section. He considered the question of whether he should Robin Hood should be condemned for his crimes or celebrated. His answer was that Robin Hood was not a criminal but a freedom fighter (as envisaged by Walter Scott): ‘The struggles for political freedom have rendered the outlaw’s habits more respectable in the eyes of nations, from the not unfrequent connexions made of them; and legitimate struggles have been branded with an ill name’.[vii] Even in popular histories such as Cassell’s History of England (1865) Robin Hood was portrayed as a noble Saxon hero who ‘made war upon the rich […] and never molested or robbed the poor’.[viii] 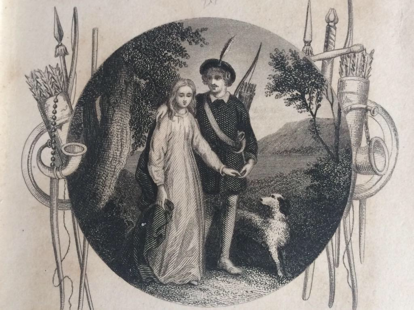 Figure 3: The Epitome of Respectability and Romanticism? Frontispiece to The Life and Ballads of Robin Hood and Robin Hood’s Garland (1859)

Walter Scott’s interpretation of the legend found its way into works of fiction by successive nineteenth-century authors. In 1840 Pierce Egan the Younger (1814-1880) wrote Robin Hood and Little John; or, the Merry Men of Sherwood Forest. Egan described Robin as an ‘an honest, open-hearted lad’,[ix] and was ‘universally honoured for the efforts which he made […] to shake off the oppressive yoke of the Norman conquerors’.[x] Throughout Egan’s (very long) novel, Robin Hood was ultimately a freedom fighter, as Scott imagined Robin Hood to be. To judge the measure of respectability obtained by Robin Hood, however, it is useful to look at other novels dealing with thieves which were published in this period. Egan’s Robin Hood was published in instalments, much like the novel Jack Sheppard by William Harrison Ainsworth, published the year before in 1839. It was an embellished account of the famous eighteenth-century house-breaker, Jack Sheppard (1702-1724). The reception of the two novels could not have been more different. Firstly, Benjamin Courvoisier, the man who killed Lord William Russell, claimed that the idea of killing him came to him after having read Ainsworth’s novel.[xi] After this revelation, Ainsworth was vilified in the court of public opinion for producing a novel in which the hero took pleasure in his crimes.[xii] Comparisons were made between Jack Sheppard and Robin Hood at the time, with Robin Hood retaining his respectable status, and Ainsworth’s friend Samuel Laman Blanchard (1804-1845) wrote a newspaper article in 1842 to expose the hypocrisy of those who ‘could hug Robin Hood as fondly as ever, and dwell with unhurt morals on the little peccadilloes of Rob Roy [another Scott novel]; nay […] had no objection to ride behind Turpin [Ainsworth’s Rookwood] to York any day […] but shook their heads at Sheppard’.[xiii]

In contrast to Ainsworth’s thief, Robin Hood was rarely depicted as ever stealing from anybody. Even when he was robbing someone, it was usually a corrupt bishop or government official. Scott’s influence upon the Robin Hood legend even spread across the channel and informed two works by the famous French author Alexandre Dumas entitled Robin Hood le Proscrit (Robin Hood the Outlaw) and Le Prince des Voleurs (The Prince of Thieves) in 1863 and 1872 respectively. Both of Dumas’ works were translated into English, and Dumas acknowledged his debt to Scott in the preface to The Prince of Thieves:

Sir Walter Scott’s fine romance of Ivanhoe has made Robin Hood’s name familiar in France as in England […] the majority of these outlawed poachers belonged to the Saxon stock, dispossessed by conquest; so that to rob a rich Norman was, after all, only recovering the property of which their fathers had been deprived. This fact, fully explained in the Epic romance of Ivanhoe and in the present account of the exploits of Robin Hood, should prevent our ever confounding these amiable outlaws with common thieves and cut-throats.[xiv]

Dumas was certain that Robin Hood could not be ‘confounded’ with the ‘common thieves and cut-throats’ of the nineteenth century. Robin Hood was a ‘good’ man, and Victorian audiences preferred ‘the security of a moral universe in which the good and bad, the criminal and the law abiding, [were] readily identifiable as such’.[xv] Robin Hood was a morally acceptable figure for Victorian audiences because, although technically a criminal, he never actually committed a crime; he was the freedom fighter envisaged by Scott. Instead the real criminals were Sheriff, Guy of Gisborrne, the Normans, and their henchmen. Robin Hood was simply a man who stood up for the rights of the oppressed.

To conclude, it is fair to say that not every Robin Hood text after Scott’s was of great quality. The Rev. Edward E. Gilliatt’s two heavily didactic Robin Hood novels entitled The Forest Outlaws, or St. Hugh and the King (1887), and In Lincoln Green: A Story of Robin Hood (1897), were unremarkable. The same could be said for J. Walker McSpadden’s Robin Hood and his Merry Outlaws (1891), or Paul Creswick’s Robin Hood and his Adventures (1917). These later adaptations of the legend sanitised the tale of Robin Hood even further, targeted as they were towards children. In Creswick’s novel, Robin Hood was described in a similar manner to the way that Scott envisaged him: ‘[the] bravest of all men – the most fearless champion of freedom that the land had ever known’.[xvi] He was a freedom fighter, and not a criminal, and this is the interpretation of the legend that has survived in modern movie and television adaptations. Consequently, Emma Butcher was right to speak of Scott’s ‘domination over Victorian literature and culture’,[xvii] and it could be added that Scott continues to dominate modern representations of Robin Hood because it is his vision of Robin Hood which survives in movie theatres. Thus the Robin Hood which Victorian audiences read in print, and who modern audiences see today on the silver screen, is not a ‘medieval’ character as such, but a Romantic invention of Sir Walter Scott’s.

[iv] In Captain Alexander Smith’s A History of the Most Notorious Highwaymen (1714), for example, Robin Hood was listed as ‘Robin Hood: Highwayman and Murderer’, and was of a ‘wicked’ disposition.

[vii] Gutch, J. M. ‘Preface’. In Gutch, J. M. ed. A Lytell Geste of Robin Hode with other Ancient and Modern Ballads Relating to this Celebrated Yeoman in which is Prefixed his History and Character Grounded upon other Documents Made use of by his Former Biographer “Mister Ritson”, Vol. 1 (London: Longman, Brrown, Green & Longman, 1847), p.V (Emphasis Added).