There are quarrels in which even Satan, bringing help, were not unwelcome; even Satan, fighting stiffly, might cover himself with glory,—of a temporary sort.—Thomas Carlyle, The French Revolution: A History (1837), p. 87 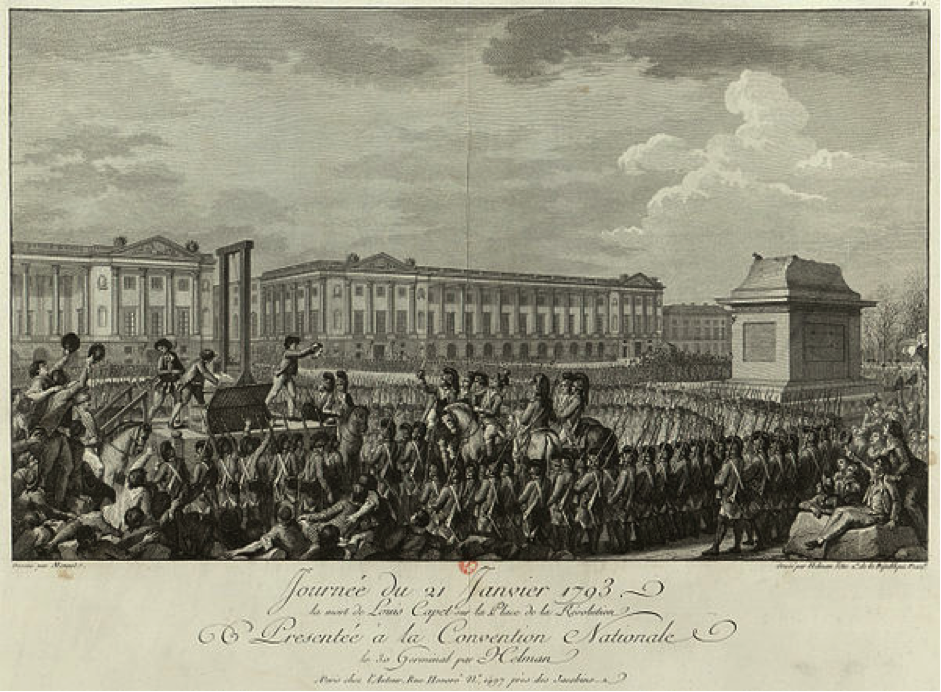 One need only cast an eye over the language Carlyle uses to find distinctly Gothic phrases, such as a description of France as ‘a dark contentious Hell-on-Earth!’ [1].

To some degree this can be seen as continuing British Protestant cynicism towards Catholic Europe, visible in classic Gothic works such as Matthew Lewis’s The Monk (1796), but also Edmund Burke’s Reflections on the Revolution in France (1790). Like Carlyle, Burke uses emotive language in his condemnation of the Revolution’s brutality, but whereas Burke was writing during the Revolution and sought to sway opinion, Carlyle’s history is merely an early example of how Victorian writers exploited the terror of the Revolution for its melodramatic and Gothic effects. For Carlyle, and the writers who followed him, the French Revolution posed more of a problem than it had to the earlier Romantics. During the Revolution, switching from optimism and enthusiasm to horror and cynicism as the Revolution entered its later stages, ‘The Reign of Terror’, came naturally. For the Victorians, confronted with the whole Revolution altogether, it posed far more of a crisis of conflicting sympathies. I would argue it is this difficulty of allocating pathos and blame between oppressed masses and persecuted aristocrats that makes the period so worrying, and gives these texts their most distinctive features.

Charles Dickens’ A Tale of Two Cities (1859) is perhaps the best-known novel set during this period, and it fully embraces the problematic nature of the Revolution. It stands as one of Dickens’ most popular and widely read works, and one of only two of his novels that are categorised as historical fiction. Whilst writing the novel Dickens is known to have used Carlyle as one of his chief sources [2], with the resemblance being apparent at several points. Dickens’ famous opening that ruminates on seasons of light and darkness seems similar to Carlyle’s assertion that that:

the whole daemonic nature of man will remain, hurled forth to rage blindly without rule or rein; savage itself, yet with all the tools and weapons of civilisation: a spectacle new in History. (Carlyle, 1920: 16)

By referring to man’s savage nature despite its civilised status Carlyle not only foreshadows A Tale of Two Cities’ opening contradictions, but also speaks directly to the Gothic mode: this is a conflict between the present’s civility and the past’s barbarisms. The recognition that it causes a ‘spectacle’, something to be viewed, is crucial in exploring how his emotive history is but a narrow margin away from being a Dickensian melodrama, and contributed to it to being framed as one. The Revolution was a spectacle, as well as a stage, and what the ‘demonic’ examples quoted above make clear is that by identifying groups or individuals as devils they were also being cast in melodramatic roles as villains. The conventions of melodrama push the characterisation of the aristocracy as sinister to extremes in A Tale of Two Cities. This can be seen through a reference to the ‘droit de seigneur’; ‘their shameful rights’ over ‘the modesty and virtue’ of the local girls (Tale, 336). As with classic Gothic fiction, Dickens leaves no doubt as to how despicable the villains are, and how much the reader should despise them. What makes A Tale of Two Cities such an interesting novel is that, in the later stages, this explicit villainy is extended to the Revolutionaries themselves as they continue down a path of bloody vengeance.The best representation of this is Madame Defarge, a ‘sharp female’ (Tale, 262), often compared to the Guillotine itself. Defarge displays a complete lack of sympathy towards those she denounces, which becomes reflected in law: ‘it is a capital crime, to mourn for, or sympathise with, a victim of the Guillotine’ (Tale, 358). One of the novel’s heroes, Sydney Carton, correctly assumes Defarge plans to use this law to continue her revenge against the innocent Darnay’s family by having them executed after Darnay himself. While the novel’s heroes demonstrate great sympathy, the novel on the whole condones a lack of it, making parallels between the Revolutionaries and the aristocrats they have replaced. A Tale of Two Cities uses its historical setting to the utmost, creating a tangible climate of fear and violence, emphasising how easily the innocent could be caught in the cycles of vengeance.

Watts Philips’ A Dead Heart (1857) covers much of the same ground. The play came to the public’s attention due to it being accused of copying Dickens’ novel, but considering both writers owed a debt to Carlyle it seems likely both explored the same themes in a similar manner. As Phillips’ sister makes plain 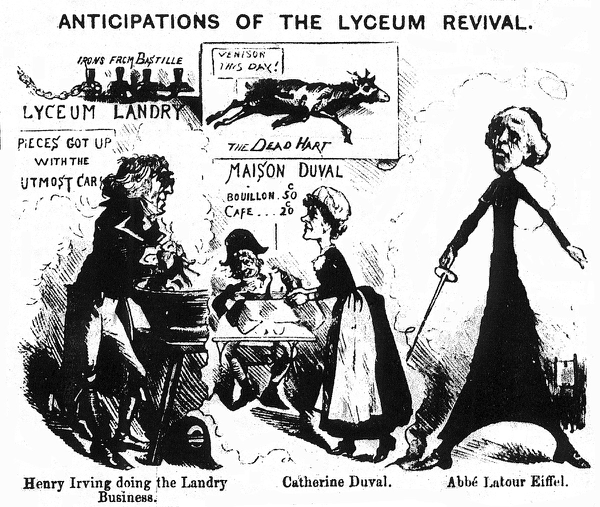 in her book about her brother: ‘the more likely explanation is that there is a legitimate development of a dramatic subject which is almost certain to be worked out by capable writers in the same way'[3]. The play revolves around Robert Landry, a man imprisoned in the Bastille so a nobleman could marry
his beloved. Once freed, Landry is found to be a changed man: ‘they plucked me from the tomb, a living man, but -with a dead heart!’ (Dead Heart, 35). Landry sets about revenge with the same lack of sympathy as Defarge, with characters commenting that ‘he’s as cold as marble and as true as steel’ (Dead Heart, 42). Again, the play seems to find the most fault with characters who demonstrate a lack of sympathy, but also their over-emphasis on revenge, instead of moving on from the past: ‘Revenge! my prison flower; I nourished it, watered it, loved it!’ (Dead Heart, 36).The restaging of the play by Henry Irving at the Lyceum theatre in 1899 was celebrated, and caused great interest.The Dead Heart‘s Lyceum revival was not alone in using the Revolutionary theme, even at the Lyceum they had staged a play called Robespierre just before on 15th April 1899. Bram Stoker, Irving’s manager, gives us some indication of what attracted Irving to these pieces:

[Irving] had read somewhere of Robespierre shaving himself whilst listening to a matter of life and death for many people and all the time turning to spit. This was a grim streak of character which fastened on his imagination. (Stoker, 1906: 268)

Just after the end of the Victorian period the appeal of the French Revolution as a setting for Gothic-inflected melodramas showed no signs of slowing down. 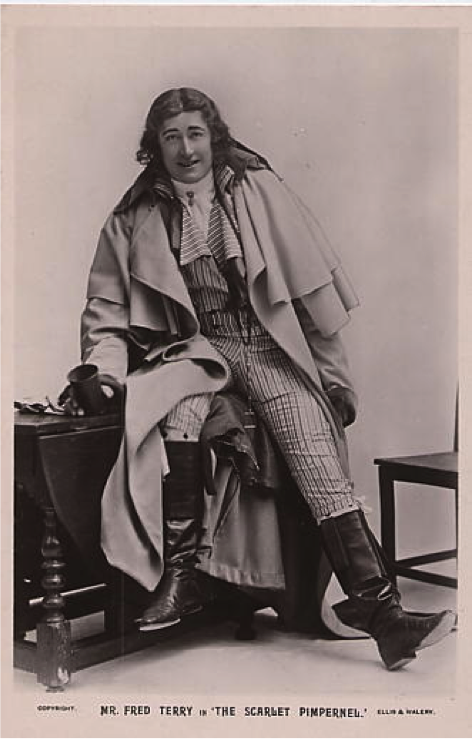 A famous example lies in Baroness Orczy’s The Scarlet Pimpernel (1905), which continues to address these same Gothic elements. The novel opens with a bleak characterisation of the Revolutionary masses, calling them ‘a surging, seething, murmuring crowd, of beings that are human only in name, for to the eye and ear they seem naught but savage creatures, animated by vile passions and by the lust of vengeance and hate’ (Scarlet Pimpernel, 3). Ideas of British and French difference resurface alongside infernal imagery as the revolutionaries are also called ‘murderin’ devils’, and more significantly, ‘Frenchy devils’ (Scarlet Pimpernel, 17, 18). Where The Scarlet Pimpernel differs is that it reinstalls the sympathetic element other writers felt was missing, albeit in the form of a British aristocrat, yet nevertheless addressing the same concerns. When the Pimpernel crosses the channel to effect a rescue it is not merely to France, but in to a barbarous past, and he risks his own safety in doing so. The Scarlet Pimpernel, its vast number of sequels, and its near-constant adaptation throughout the twentieth-century, reiterate how the Gothic’s preoccupation with the past has diffused in to other forms, but maintains the same basic concerns that made it frightening to readers of Carlyle: people’s capacity to harm one another. The few examples explored here detail two kinds of state-endorsed brutality, from the perception of the pre-Revolution aristocrats as answering to no one, reigning with tyranny over their subjects, through to the hysteria and revenge associated with the revolutionary leaders during the ‘Reign of Terror’. The name is an apt one, for it does seem to be terror that held the most sway during this period in the Victorian imagination, consumed with sublime delight attending a theatrical melodrama or reading a piece of historical Gothic fiction.

Burke, Edmund. Reflections on the Revolution in France (1790).Indianapolis: Bobbs-Merrill, 1955.

Oddie, William. Dickens and Carlyle: The Question of Influence. London: The Centenary Press, 1972.

[2] Oddie, William. Dickens and Carlyle: The Question of Influence (London: The Centenary Press, 1972).